Origin of the art and its uses:

Legend has it that Raja Janaka, father of Sita, commissioned craftsmen with paintings on the walls of palaces and houses in the entire kingdom on the occasion of his daughter’s marriage with Lord Ram. That was the first time this art form was used for a celebratory event, to which previously it was just used by women of the household to beautify their homes.

It is a divine and natural art that originated around the Mithila and Madhubani areas of Bihar in India and bordering areas of Nepal. The origin approximately dates back to almost 2500 years ago from the present times.

Madhubani paintings were also used as a method to control deforestation; the trees that the people wanted to save were painted with images of Gods and Goddesses, thus preventing them from being cut down.

Geometric shapes and patterns are also used widely in the creation of the art together with softer floral designs. The fish, peacock, tree, sun are among the many recurring motifs of Madhubani.

Madhubani art is created instinctively by the artists without the use of sketches. This feature makes each Madhubani painting unique. Every painting has double lined borders, generally no space is left vacant, and it is either filled with colours or different flower or leaf patterns.

Traditionally, powdered rice was mixed with natural dyes and pigments and thereafter used on the freshly plastered mud walls. 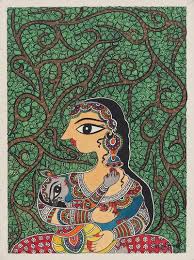 The colours used in this rich craft were traditionally obtained from natural sources. Black was derived by mixing soot with cow dung, yellow from turmeric, pollen or lime and blue from indigo. Crimson hue was developed from the juice of kusum flower, red sandalwood or rose. Green dye was acquired from leaves, white dye from powdered rice paste and orange dye from palash flowers. Twigs, branches, leaves, match sticks, ink pens and brushes are used to create the paintings. Initially it was done on walls of mud huts, later made a shift to canvas and other fabrics.

Artists in the present era has risen above the caste barrier, the styles are practiced by all, sometimes in fusion to each other too.

Introduction to the rest of the world and artists:

Madhubani paintings were unknown to the outside world until discovered by the British colonial William G. Archer. While inspecting the damage after the massive Bihar earthquake of 1934, Archer was amazed by the beautiful illustrations on the newly exposed interior walls of homes and popularized it by introducing it to the rest of the world.

It was primarily created and practiced by women only, but with the increase of the popularity, both men and women artists now follow this art form and use it for more commercial purposes, which gives it a widespread exposure throughout the world. Madhubani motifs and designs are also used to make bedspreads, cushions, sarees, vases, coasters and many other household items.

Madhubani has been given GI (Geographical Indication) for its deep and expressive portrayal of the lives of people and the need to preservation of the art.

Sita devi, Jagadamba devi, Mahasundari Devi, Baua Devi, Yamuna Devi, Shanti Devi, Chano Devi, Bindeshwari Devi, Chandrakala Devi are some of the many Madhubani artists who have been honoured with state and National Awards for their artistic work.

Disclaimer: Please note that the information used here has been researched from the internet and the writer is aware that there is more information which has been left out due to the restrictions regarding the length of the article.

My Tweets
Launched: Samskriyā Bhubaneswar ChapterSeptember 13th, 2015
We are glad to share with you all that we have launched Bhubaneswar Chapter of Samskriyā today. Our team visited a Child Care Institute "Jeevan Jyoti Ashram" and had an interaction with the children and distributed some toiletries and sanitary items among them. We would be associated with them for some programs that include education, skill development, hobby classes etc. We thank all the staff members of the care institute for their kind support. We seek your blessings and good wishes.
Launched: Samskriyā YouTube ChannelSeptember 13th, 2015
We are up with our YouTube Channel. Please find our videos here: https://www.youtube.com/channel/UC7qxahfm9VD8F2hxSLRr2TQ Don't forget to Subscribe and Share!!
%d bloggers like this: