Nosophobic! That’s exactly how I termed myself after I was caught hold of the bug.

I boastfully acclaimed myself as the most salubrious guy one could find in distant family and relatives. But in my own arrogance, I forgot, “Change is the law of life”. I was left to witness my own journey which changed my approach and flushed my arrogance. I’m sure it will motivate and change lots of lives as it did to me.

Right after my class 12th results, I shifted to Pune in order to pursue my career in engineering. I used to be the paragon of a jovial college going student. I was ready to mix-up and friendly guy in my batch. But being a thousand miles away from home has its own ups and downs. You have none to care for but you, nobody to look after you except your peers, a life of responsibilities on your own shoulders and openness to moral, social and mental uplift. Hostel life has mostly been considered a perfect shade of a messy, filthy and chaotic life, marked with improper health and style of personal care. A filthy life brings problems too, sometimes small and sometimes disastrous. This marks a life-turner to me, which clocks down to the final year of my engineering. One fine day when I was having those daily gossips with my mates, I felt at unease. I had been feeling red-hot with fever caught with cough, weight loss, weakness, night sweats and reduced appetite for weeks. Out of pomposity I ignored thinking what would happen to a guy as healthy as me. God was adamant to break me up this time.

Upon being coerced by my friends, I returned home. I brought worries to my family as I was missing the placement sessions. My parents escorted me to the family physician where I was prescribed a few tests- A chest X-ray and a tuberculin skin test (also called a TB skin test, PPD test, or Mantoux test). And believe me, the skin test made me feel as numb as dead. A simple skin test though, a small amount of a substance called PPD tuberculin was injected just below the skin of the inside forearm. Imagine the agony! I was called back after 48 hours for getting the arm checked for swelling at the injection site. I had a hard, raised red bump. I was totally blank. Grief struck me when I was informed – “You’re likely to have TB infection.”  The size of the bump connoted that.

Now I connected the dots in my mind, connecting the positive test results to the symptoms of TB that I had been ignoring for a long time. There were a plethora of tests to satisfy me- Sputum test, Chest Test, Biopsy Test, Culture test, blood test, but in my case, I guess two were enough. It was followed by continuous rounds of the visit to the physician. Every time I saw him, my heart sank more, knowing that I would be told more and more of the story that I never wanted to hear. Weeks went by in a detailed information session each time I visited. This left me exposed to volumes of information about the deadly disease. I felt I could compile an entire book on Tuberculosis.

I was haunted by the magnitude of the disease and was still unaware of the dire consequences it might bring to me. Tuberculosis had me risk my entire career as I missed the placements and the final semester exams were approaching. I wanted to avenge this defeat, so I thought that in no way I’m going to put tuberculosis at the winning end, for me and for everyone else. My parents were the supporting spans throughout my ailment and treatment, displaying remarkable in a time when my career was at stake. “Everything’s going to be alright”, that’s how my dad encouraged me, thus restoring my confidence.

During the treatment sessions, I came to know the deadliness of the virus. It came to me as the result of an airborne pathogen, Mycobacterium tuberculosis, which is the carrier of TB and spreads through the air from person to person through microscopic droplets released into the air when someone active form of tuberculosis coughs, speaks, sneezes, spits, laughs or sings.

The physician explained the occurrence in latent and active forms. In latent TB, the TB bacteria remained in the body in an inactive state but they could become active. In an active TB, the bacteria caused symptoms and could be transmitted to others. About one-third of the world’s population is believed to have latent TB. Latent TB becomes active TB, with a higher risk in people living with HIV or malnutrition, or people who smoke.

During my freshman year, I was blackjacked to take up smoking but I always denied it and felt lucky that I did so, as not denying that would have increased the potential danger on me. In a tuberculosis awareness camp organized in the city by a local hospital, I came to know that people with a compromised immune system are more at risk of developing active tuberculosis. People who are infected with both HIV and TB are around 20-30% more likely to develop active TB than those who do not have HIV. HIV suppresses the immune system, making it harder for the body to control TB bacteria. Moreover, tobacco use has also been found to increase the risk of developing active TB. Over 20% of TB cases worldwide are related to smoking. Women between the ages 15-44, young boys, adults, Infants and children aged less than 4 years, people infected within the previous two years, people infected with HIV, people who have certain illnesses or conditions which affect their immune system, such as people with diabetes, and people with chronic renal failure and people living in developing countries are on the verge of contracting it more likely. In 2012, 80% of reported TB cases occurred in just 22 countries.

I was already aware of the health impacts, but I never knew that in addition to lungs, TB could affect the kidneys, heart, bones, spinal joints and brain. TB infecting bones could lead to joint destruction, TB infecting brain could turn into meningitis, TB infecting the liver and kidneys could impair their waste filtration functions and lead to blood in the urine and TB infecting the heart can impair the heart’s ability to pump blood, resulting in a condition called cardiac tamponade that can be fatal. I was advised over and over that the medications are the cornerstone of tuberculosis treatment. But the treatment takes much longer than treating other types of bacterial infection. With tuberculosis, one ought to take antibiotics for at least six to nine months. The exact drugs and length of treatment depend on age, overall health, possible drug resistance, the form and the infection’s location in the body. Most common TB drugs are- Isoniazid, Rifampin (Rifadin, Rimactane), Ethambutol (Myambutol), Pyrazinamide, Bedaquiline and Linezolid. Tuberculosis had the following risks involved: Weakened immune system, Traveling or living in virus-prone areas, Poverty and substance abuse, lack of medical care, Substance abuse and tobacco use.

To me and my friends, the statistical data worked as an eye-opener, as we thought that tuberculosis is the disease of the poor. Amused to know that in 2014, 9.6 million people around the world became sick with TB, causing 1.5 million deaths worldwide. TB is a leading killer of people who are HIV infected. A total of 9,421 TB cases (a rate of 2.96 cases per 100,000 persons) were reported in the United States in 2014 by the Centre for Disease Control and Prevention. The reported case rate was 3.0 cases per 100,000 populations, which is 2.2% lower than the rate in 2013. These are the lowest rates recorded since national reporting began in 1953, although the declines are small.

During my bed-ridden research, I was astounded to read that India is the country with the highest-burden of TB. The World Health Organization (WHO) statistics for 2014 gave an estimated incidence figure of 2.2 million cases of TB for India out of a global incidence of 9 million. The estimated TB prevalence figure for 2014 is 2.5 million. The TB prevalence is the number of people in India who are living with active TB.

Of all the countries that report their TB statistics to WHO, there are 22 countries that are sometimes referred to as the TB “high burden” countries, and they have been prioritized at a global level since 2000. There are currently 22 of these countries and between them, they accounted for 82% of all estimated cases of TB worldwide in 2013. It is believed that the incidence of tuberculosis has reduced from 216 per 100,000 per year in 1990 to 176 per 100,000 per year in the year 2012 in India, the tuberculosis mortality per 100,000 populations having been reduced from 38 in the year 1990 to 22 in 2012. 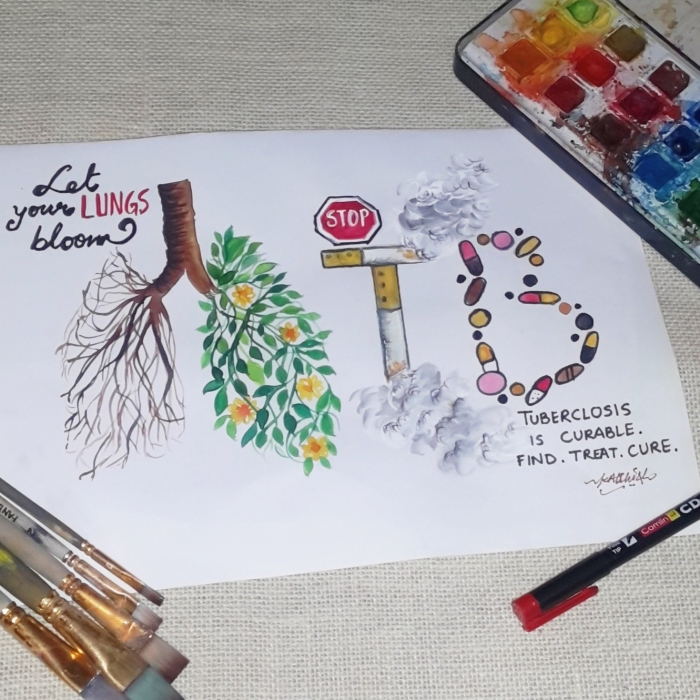 The illness saga continued for 6 months, which had eventually landed me a six-month extension in my degree. Whatsoever the reason may be, I was deemed ineligible for campus interviews. I knew I had lost a fortune when it was about studies, but to the inner me, my family, my friends, my views, ideologies and imagination to life, they underwent a quicksilver metamorphosis. If I traverse back the timeline, I see well how changed I was, how changed my parents and friends were. Having returned from death’s mouth taught me how important this life is, to me, to my family and to everyone I cared about. I never wanted to see anyone disappointed with what happened to me, but rather make it a lesson. During these months, I somewhere did away with my arrogance, pomposity and the kind of rodomontade guy I used to be while talking of my health. A disease can invade anyone and everyone. It can lacerate you to the infinitesimally small bit. I suffered all of it but kept going, having faith in myself, God, family and friends. Today I stand as one of the victims of the who nearly lost his career, but the sheer will, determination, assiduousness and love for life landed him in a bigger fortune.

My message to everyone is that everything in life is random, so live life to its fullest, going on matter what comes. Fight what comes your way, prove your mettle and conquer your desires. At the end of the day, it’s about my dad’s piece of advice- “Everything’s going to be alright, beta!”

My Tweets
Launched: Samskriyā Bhubaneswar ChapterSeptember 13th, 2015
We are glad to share with you all that we have launched Bhubaneswar Chapter of Samskriyā today. Our team visited a Child Care Institute "Jeevan Jyoti Ashram" and had an interaction with the children and distributed some toiletries and sanitary items among them. We would be associated with them for some programs that include education, skill development, hobby classes etc. We thank all the staff members of the care institute for their kind support. We seek your blessings and good wishes.
Launched: Samskriyā YouTube ChannelSeptember 13th, 2015
We are up with our YouTube Channel. Please find our videos here: https://www.youtube.com/channel/UC7qxahfm9VD8F2hxSLRr2TQ Don't forget to Subscribe and Share!!
%d bloggers like this: